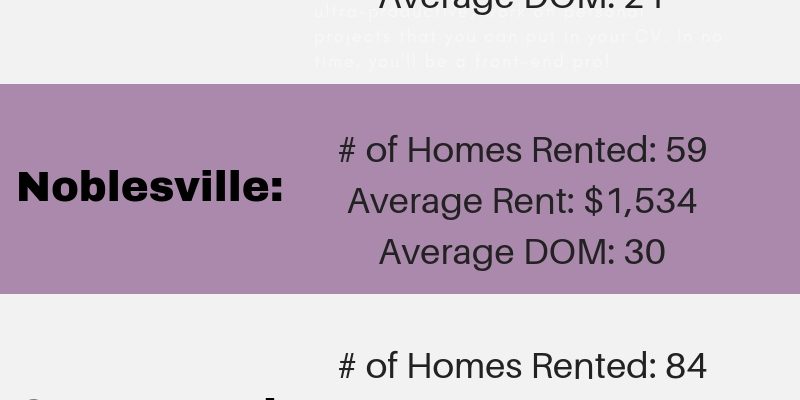 As many of you know, Central Indiana is a seasonal rental market. The first half of the year is booming, the second half… well, not so much.

And the 4th quarter of every year is always the slowest.

This year was no different.

In fact, you’ll have to go back more than four years to find a slower quarter for rental properties.

Indianapolis saw just 521 homes rent during the fourth quarter. Compare that to 833 homes

leased in the second quarter and 576 homes rented in the third quarter.

That’s the fewest homes rented in Indianapolis since the second quarter of 2013. In that quarter, only 419 homes rented.

December was particularly slow, as only 130 total homes rented during the entire month.

As you might expect in a slower market, rents in Indianapolis dipped to an average of $1,185 (down from $1,234 in the previous quarter) and days on market came in at 42, up significantly from 33 in the third quarter.

OVERALL, 2017 WAS A STRONG YEAR FOR CENTRAL INDIANA

The year as a whole, in spite of a lackluster fourth quarter, was still a good one for Indianapolis Landlords.

If you remember from previous blogs, the first and second quarters of 2017 were exceptionally strong, which could explain the big drop off during the final half of the year.

It seems a large majority of people moved earlier in the year and decided to sit tight as we progressed into the colder months.

October was a solid and busy month for us on the rental marketing side of things. However, we, too, saw a drop in activity during November and December.

As you may know, Indianapolis is currently undergoing some extremely cold weather. Most days remain in single digits and most nights experience sub-zero temperatures. We’ve been extremely busy weather-proofing our vacant houses, along to responding to numerous calls concerning no-heat and frozen pipes.

The good news is that warmer temperatures are in the immediate forecast.

The increased temperatures should not only thaw out the ground, but also thaw out the rental market. January, historically, is our biggest application month of the year and, in spite of the frigid temperatures, our activity has already picked up significantly.

In short, we expect to be extremely busy in January with applications and lease signings.

If you’re interested in seeing if we’re a good fit for your property management needs, let’s chat.