The temptation is there.

We see it all the time.

Your Tenant vacates your rental home and your Property Manager provides bids for the turnover work.

You review the bid and that nagging voice in your head takes over… “This bid seems too high. I JUST KNOW I could do the work for less money.”

Some of you may live close to your property, have contractors at your disposal and have time to invest in managing the work.

But, most of you live hundreds of miles away, don’t know any contractors and really don’t have the time to devote to herding those contractors.

You still do it though, because you think you can save money.

In some cases, maybe you can.

But, in a significant number of cases – cases that we’ll provide in this blog –  you’ll end up losing money in the long run.

We’ve said it over and over… vacancy is a cash flow killer.

Vacancy comes with zero income and a lot of expenses.

Sure, some of those expenses relate to the actual material and labor required to prepare the property for the next Tenants, but the biggest “expense” is the lost revenue from rents.

So, the faster the property is turned, the faster your new Tenant can begin adding to your income.

Time, clearly, is off the essence.

Below are some real-life examples of properties within our management and Owners who chose to do their own work.

Special thanks to our Senior Property Manager, Don Castelluccio, for providing these case studies.

Example #1:
In an attempt to save money this homeowner completed most of their own turnover work as they felt the costs charged by the professional contactors used by T&H was too expensive. 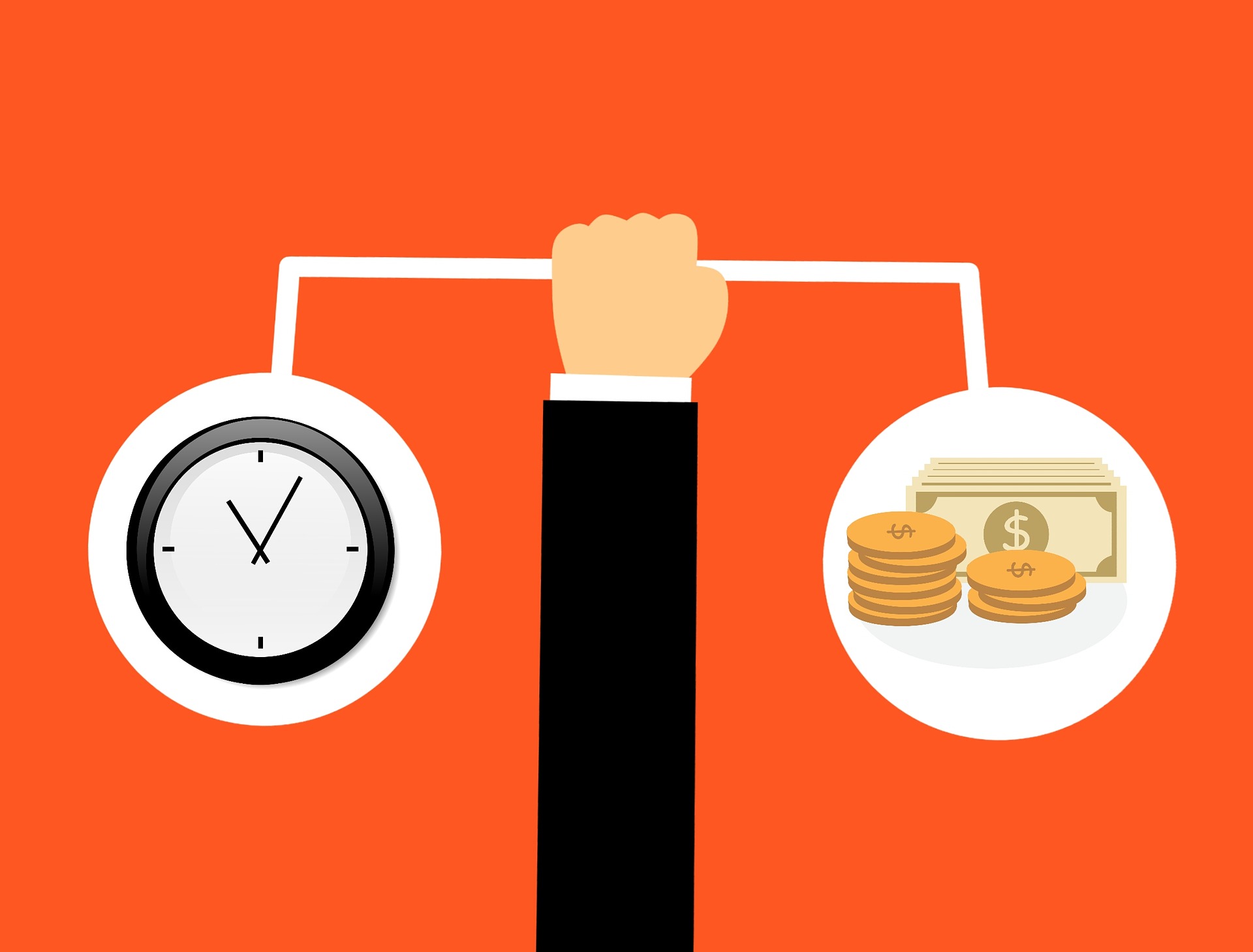 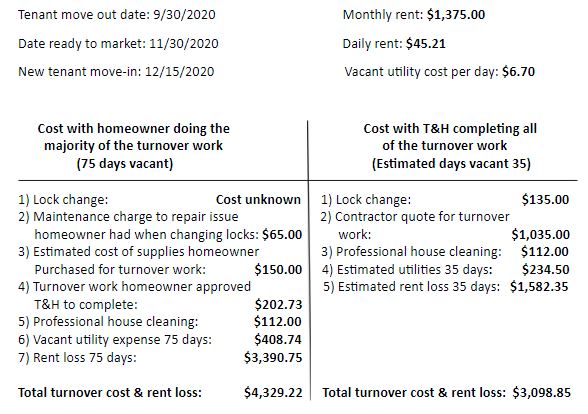 This homeowner cost themselves $1,230.37 by doing their own turnover work.

This example does not take into account the cost of the homeowner’s time and the cost of gas to and from the property or driving to get supplies.

When this homeowner’s Tenant vacated their rental property, T&H presented the homeowner with a quote in the amount of $1,716.00 for all the turnover work needed to get the house in marketable condition.

The homeowner decided they wanted to do many of the turnover items to save money.

The homeowner did decide there were a few things that they could not do himself, or didn’t want to do, so they ended up having T&H contract the interior painting as well as some of the maintenance items and cleaning.

Since the homeowner was involved in the turnover, it made for the property being vacant for 80 days, twice the amount of time needed had we handled the turnover. 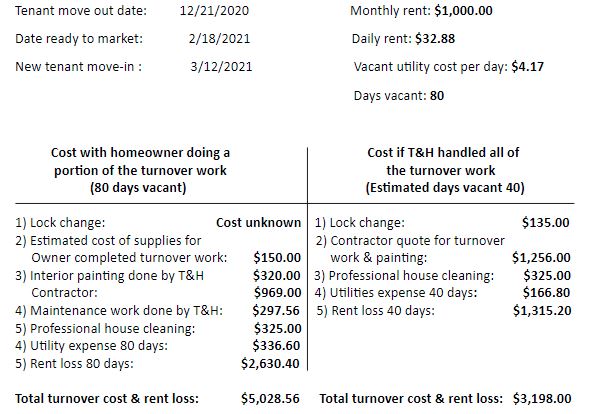 This homeowner cost themselves $1,830.56 by doing a portion of the turnover work themselves.

This example does not take into account the cost of the homeowner’s time and the cost of gas to and from the property or driving to get supplies.

This homeowner has had 2 of their properties become vacant in less than 6 months and decided they would try and save money yet again by doing a portion of their own turnover work. 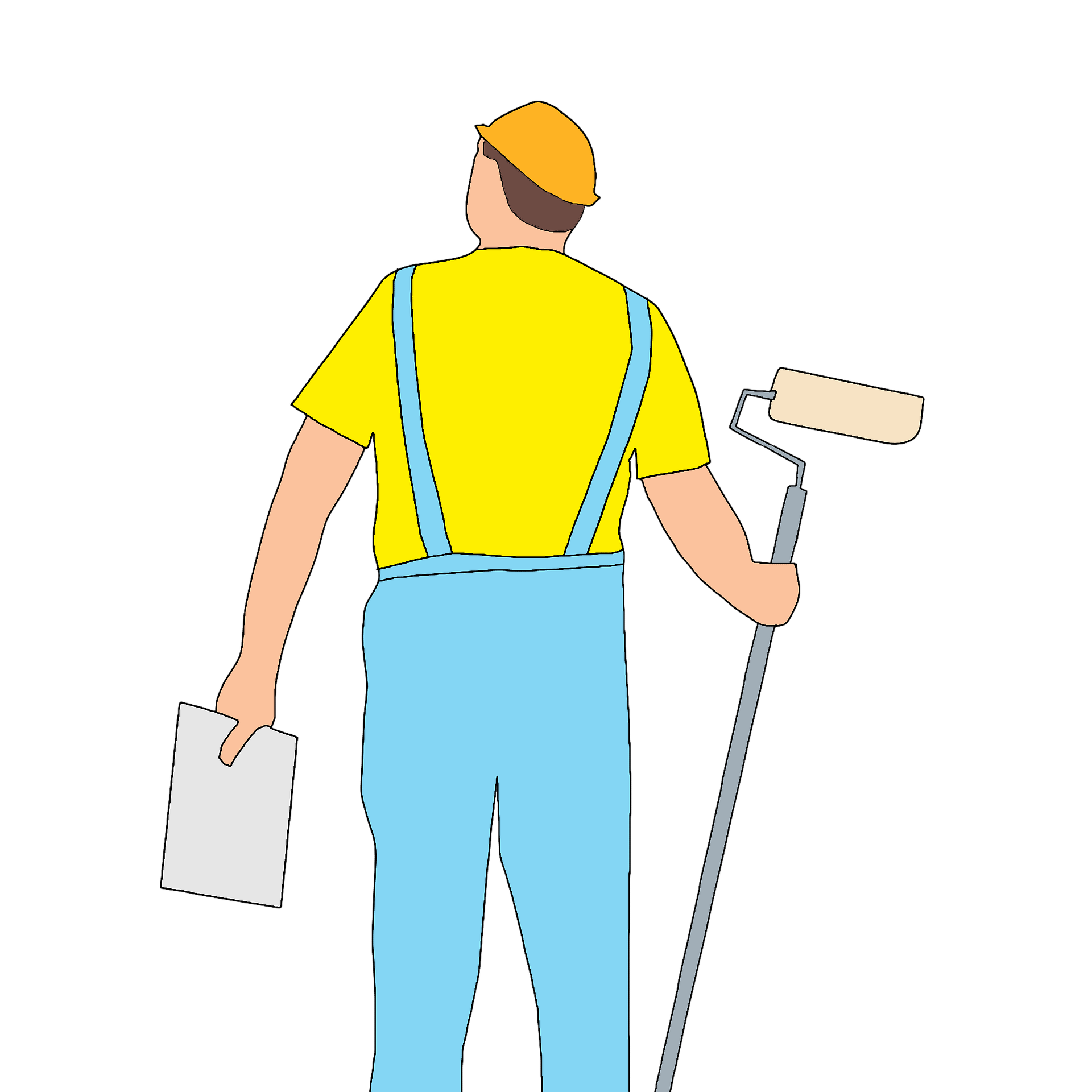 That makes for $1,915.32 this homeowner has cost themselves in less than 6 months by doing their own turnover work.

It took the homeowner 54 days to complete the turnover work (and there wasn’t a lot of work needed) before we were able to market the property.

The marketing and leasing phase took another 31 days before a tenant moved in and started paying rent.  This made for 85 days of vacancy loss. 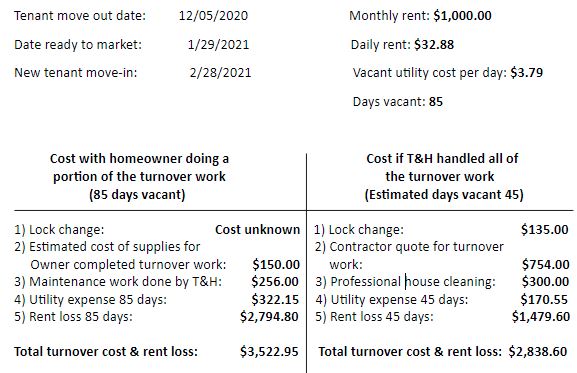 This homeowner cost themselves $684.95 by doing a portion of the turnover work themselves.

This example does not take into account the cost of the homeowner’s time and the cost of gas to and from the property or driving to get supplies.  Based on these additional factors, the homeowner cost themselves additional time and money that is not reflected in the number listed above.

After the tenant moved out of this homeowner’s rental property T&H presented the homeowner with a quote in the amount of $1,447.35 to complete all the turnover work needed to get the property in marketable condition.

This quote was very reasonable for the turnover work needed at this property. However, the homeowner had different thoughts.

The homeowner felt the quote from our general contractor in the amount of $969.00 was too expensive and decided they wanted to try and save a few hundred dollars and find a less expensive contractor on their own who would complete this work.

The owner spent 60 days trying to find a less expensive contractor but was unable to do so, and eventually gave T&H the okay to proceed with the turnover work as originally quoted. 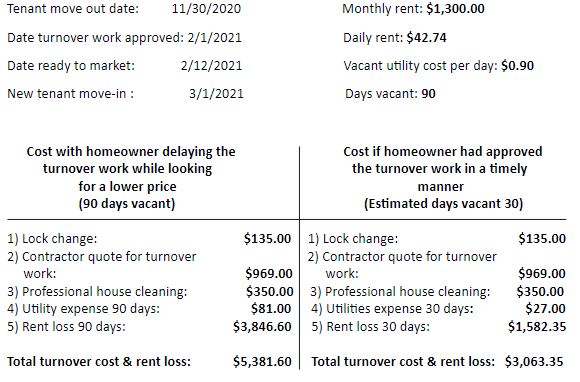 This homeowner cost themselves $2,318.25 by holding up the start of the turnover work for 60 days, while trying to find a cheaper contractor, in hopes of saving themselves a few hundred dollars.

Prior to this property being vacant, it was pre-marketed online as “Coming Soon.”

The property had over 250 people on the waiting list who wanted to view the property once the turnover work was completed and showings of the property were allowed.

Unfortunately, after waiting so long for the homeowner to give the necessary approval for the turnover work, most of the potential tenants on the waiting list had moved on and found other properties to lease.

Again, we certainly understand the temptation to do your own work. We also understand that, in some cases, you can save some money. But, by in large, allowing your property manager to move forward and reduce your vacancy time, you’ll come out ahead.

Want To Know What Other PM Companies Won’t Tell You?
Click Here!