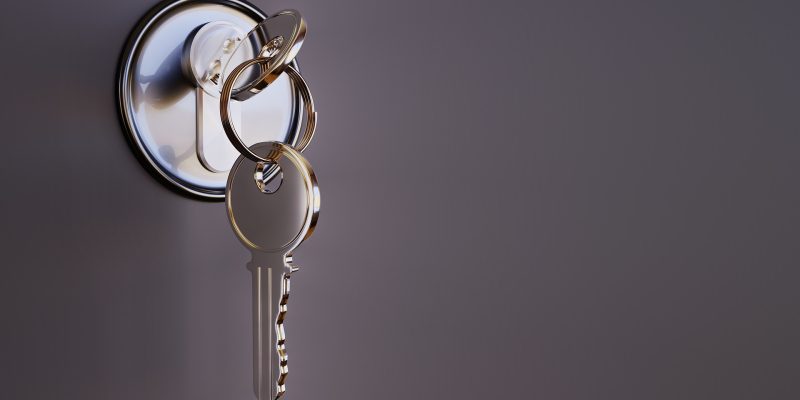 *This review is not paid for or solicited by SimpliSafe or any of its affiliates.*

Break-ins are a real and unfortunate reality of owning rental properties.

They rank right up there with some of the more difficult parts of being a Landlord.

Several years ago, when break-ins occurred in a rental property, options were limited in terms of security systems.

No matter which provider you went with, a long-term contract was almost always a part of the deal and an invasive installation was always required.

So, if the property was vacant, a Landlord had a decision to make… either wait until a new Tenant took possession (and chance another break-in) or bite the bullet and sign-up for a multi-year contract.

Neither option was a good one.

If the break-in occurred while the property was occupied, the Tenant was in a similar position. A 3-year security system contract may not make the most sense if the Tenant only intended to stay for another six months.

Related: What if Someone Breaks-In to My Indianapolis Rental Property?

SimpliSafe has helped solve the security system dilemma for both Owners and Tenants. 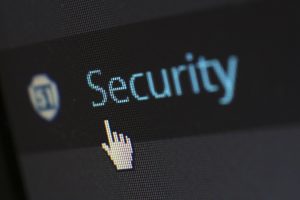 As we’ll discuss more in this review, SimpliSafe offers a viable option for both property Owners and Tenants because of its EXTREMELY flexible billing terms and DIY installation that won’t cause any damage to the property.

A number of our current Owner Clients have taken advantage of SimpliSafe for their properties, and a few of our staff members use it in their personal residences as well.

After 3+ years of working with the system, we’ve developed a robust understanding of both the good and not so good aspects of it.

Informally established in 2006, SimpliSafe is an American home security company based in Boston, Massachusetts.

The founders, Chad and Eleanor Laurans, decided to create the system after several of their friends experienced break-ins in the Cambridge area and could not find a security company that was designed to help renters.

Chad and Eleanor worked on the product in their own home from 2006 to 2008 and tested it at friends’ houses to get feedback and improve it. SimpliSafe officially launched in 2009 and in just 4 years, they reached $38.5 million in revenue.

One of the most unique things about how the SimpliSafe equipment guards your home is the Base Station.

Most security systems use a main control panel to communicate with sensors and sound alarms if intruders enter your home.

But SimpliSafe does not.

Instead, it uses a main base station that controls the sensors independently from the keypad you use to arm and disarm the system.

This proves pretty useful in thwarting burglars who are fond of a little method called “crash and smash.” Most alarm systems have a grace period before they alert you to an intruder, usually about 30 seconds. Some burglars’ strategy is to break into a house, find the control panel, and destroy it. If the control panel is offline, the rest of your security system is useless.

With SimpliSafe, the keypad doesn’t actually control anything. That’s all up to the base station. If you hide your base station in a discreet location, any burglar trying to “crash and smash” will find themselves out of luck.

Plus, SimpliSafe’s keypad does start beeping when the system is triggered, which can trick intruders into heading toward the keypad, rather than the base with the actual power.

There are two monitoring plans you can choose from, Standard and Interactive.

You also have the option of no monitoring plan which means if someone broke in, the alarms would sound but no one would be alerted. We don’t really recommend this option for obvious reasons.

Once you choose your monthly plan, you can pick your equipment. SimpliSafe makes it easy to customize home security with add-ons. You can choose parts individually or as value sets.

There are 18 different pre-made packages to choose from ranging from $230 to over $500, here are a few examples of the different options:

You can also build your own package so you only pay for exactly what you need. Here is a cost breakdown of all the available equipment.

If you’re really on a budget, SimpliSafe also offers refurbished equipment at a 15%-28% discount.

SimpliSafe offers a 60-day in home trial and if you aren’t 100% satisfied, you can return your equipment for a full refund.

The system also comes with a 3-year warranty. 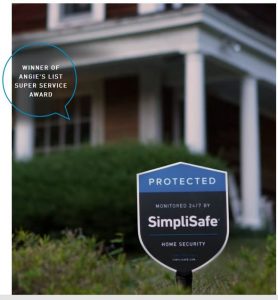 SimpliSafe’s emergency monitoring is provided by C.O.P.S. which has earned the “Best Monitoring in the Industry” award from Central Alarm Association and is the two-time winner of CNET’s Editor’s choice for home security.

No Home Automation – One of the biggest criticisms of the product, is the severe lack of integration with smart devices.

SimpliSafe seems to be a bit behind the curve in this regard since this day and age is all about convenience and the “smart” movement has become increasingly popular.

Many other home security companies are offering these types of pairings and we would like to see SimpliSafe join in that trend in the near future.

No outdoor camera option – Less important but still worth noting, SimpliSafe doesn’t offer an outdoor camera which we feel could offer tremendous value to property Owners.

The indoor camera the company offers is great for the money, but an outdoor camera could be an even bigger deterrent but does require Wi-Fi, which may be unavailable for unoccupied homes.

Paying extra for mobile control – You don’t get access to the SimpliSafe mobile app without subscribing to the $24.99 per month interactive monitoring plan.

The basic plan really is basic. You don’t even get access to text or email notifications, or the command center that allows you to customize alerts and alarms.

We feel that a mobile app seems essential for the day-to-day, and that treating it as an “extra” doesn’t really make sense.

On top of that, the app itself is extremely basic. It allows you to arm/disarm the system, view the activity log and view live camera feed (if applicable).

SimpliSafe is a basic system overall as the name suggests, which is fine. Just include it with the basic monitoring plan and there would be less to complain about.

Affordable – SimpliSafe offers one of the most price conscious home security systems on the market. 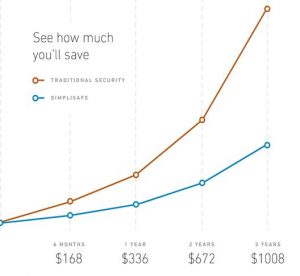 There’s a common misconception that the more you pay, the more you get. But the truth is, you’re paying for markup. Not more security.

SimpliSafe manufactures its own equipment, essentially cutting out the middleman, which brings more savings to you.

Compare their $14.99/month option with the industry average of $42/month.

SimpliSafe’s Premium plan ($24.99) is still half the cost of most security companies’ basic plans.

No Contracts – As we noted above, the most appealing part of SimpliSafe, is no long-term contracts.

While many companies try to lock you into 3-year contracts, SimpliSafe offers a flexibility that is unparalleled. You have the freedom to manage your account on a month-to-month basis with the option to cancel, upgrade, or downgrade, at any time.

Easy, self-installation – This is another huge benefit to both Landlords and Tenants.

The self-installation kit requires no drilling or alteration of the property of any kind.

As a property Owner, you could easily install it in one property while it is vacant, and then once it’s rented, move it to another home that is waiting to be leased.

Vacant rental homes are almost twice as likely to be broken into, so this could be a great option to deter potential incidents.

Overall, no alarm system is perfect.

It seems like we have two types of break-ins at the homes we manage. 1) The professional jobs that involve stealing HVAC equipment, appliances, etc. and 2) Just plain breaking and entering which involves squatting and/or simple vandalism. 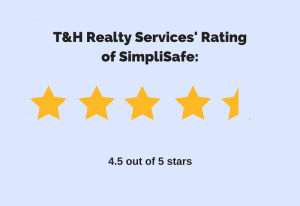 In B&E cases, it’s mostly kids that are wanting a place to hang out and/or party. They generally are just being mischievous, although these occurrences can be frustrating and costly. Obviously, no one wants to have property losses.

For these reasons, we have decided to offer the SimpliSafe home security system to our Clients during vacancies. For additional fees, we will provide, set up, and break down of the equipment as needed. Then monitor activity, as well as pay the monitoring bill during the time the system is needed. There is no long term subscription or equipment to purchase.

Our process makes it completely hands off for our Clients should they choose to rent the product through us.

Unfortunately, it’s very difficult to prevent all break ins, but as far as alarm systems go, SimpliSafe has been highly effective in deterring or lessening the losses from them.

PrevPrevious3 Major Reasons the Condition of Your Indianapolis Rental Property is Important
NextExcessive Tenant Fees: The Property Management Trend That Needs to Be AddressedNext